A majority of states open their primaries to unaffiliated voters, yet Colorado clings to an antiquated system that leaves out nearly 4 in 10 voters.

Colorado leads the nation in the growth of unaffiliated voters since 2008, and they now make up a plurality (more than 35%) of active voters. 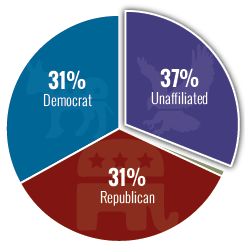 Roughly two-thirds of newly registered voters in 2014 chose not to affiliate with a party.

Colorado has some of the highest general-election turnouts in the nation, but primary turnout has declined from 31% of active voters in 2010 to just 22% in 2014. (Secretary of State data)
Colorado is one of just 14 states that relies on caucuses in the presidential nominating process. (Alaska, Hawaii, Idaho, Iowa, Kansas, Kentucky, Maine, Minnesota, Nebraska, Nevada, North Dakota, Washington and Wyoming are the others.)
Caucuses limit participation. There are more than 3.6 million registered voters in Colorado, and just 180,000 (5%) participated in 2016 caucuses.

*Colorado Republicans did not conduct preference polls at their caucuses, but they were the starting point for the selection of delegates to the party’s national convention.